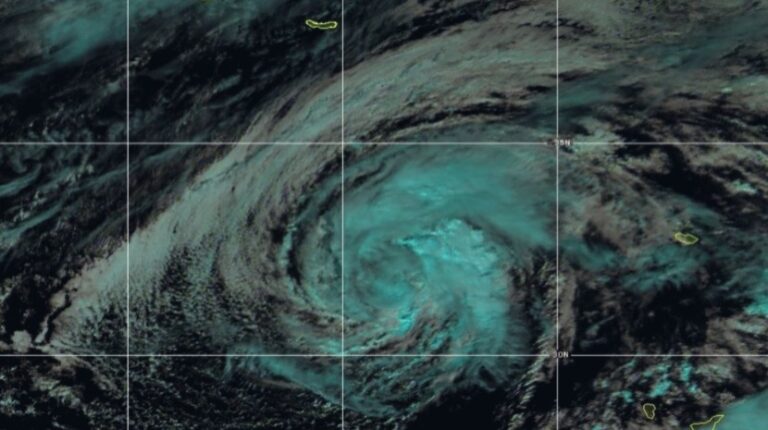 For the archipelago of Madeira, heavy rainfall is expected, sometimes accompanied by thunderstorms, between Saturday and Monday.

In the satellite image of the National Hurricane Center (NHC) you can see the proximity of the storm to the archipelago of Madeira, where all the forecasts point that it passes to the side, moving eastwards, with an approximate speed of 19 km / h. The estimated wind was 93 km / h, with gusts up to 111 km / h, at 3 pm today (Friday), but the storm was still in the middle of the Atlantic, at 760 km south-east of the Azores.

According to the Portuguese Institute for the Sea and the Atmosphere, the tropical storm ‘Theta’ is expected to pass the post-tropical storm on the 16th (Monday), but it is certain to influence the weather in the Madeira archipelago between tomorrow and Monday (day 16).

According to the NHC forecast, a probability of 10 to 30% of the Madeira archipelago was attributed to being hit by a wind of tropical storm intensity, that is, a wind above 63 km / h and less than 118 km / h.
Thus, the Madeira archipelago is expected to have intense rainfall, sometimes accompanied by thunderstorms, between Saturday and Monday. The wind will blow from the south quadrant, sometimes strong (up to 55 km / h), with gusts up to 80 km / h, which may reach 100 km / h in mountainous areas, especially on Monday. Regarding the state of the sea, it is also expected an increase in maritime agitation with waves from the south that can reach a significant height of 4 m.

The IPMA will update all the information in an update of the weather warnings in the next 48 hours and in a statement that will be updated at 5 pm tomorrow.

Extra treat after Fireworks on Saturday