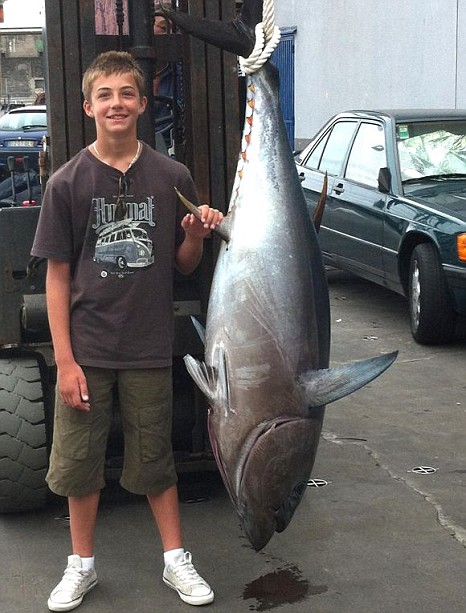 Tobi Hughes·9th August 2012
News Blog
Stunned 12-year-old Conor Smith hooked the whopper on holiday off the coast of sunny Madeira last Saturday and is waiting for the record to be made official.
At double the youngster’s body weight, the skipper of the boat had to use a fork lift truck to load the 5ft fish onto the scales to weigh it.
‘We’d been out a couple of times and only caught one fish but I really wanted to go out again,’ explained the amateur angler.
‘I was shocked when I got this almighty pull on my line – I thought I’d caught a whale.
‘It took half-an-hour to reel in – it was a bit of a battle and it took two men to actually lift onto the boat using all the hooks we could.
‘It weighed 187lbs – that’s pretty much the weight of my older brother Alex who is 6ft 5in.’
He added: ‘It still feels good to achieved such a catch – my mates have been congratulating me quite a lot.’
The youngster had to leave the fish behind him as the family were catching a flight back to their West Midlands home the following day.
His proud mother added: ‘We had to leave it behind unfortunately as we were leaving the next day so we didn’t eat it.
‘I think it would have cost too much in excess baggage anyway, it probably would have needed a plane seat all of its own.
‘It’s probably best we didn’t actually because we would have been having tuna sandwiches for lunch for months to come.’

Near accident on expressway