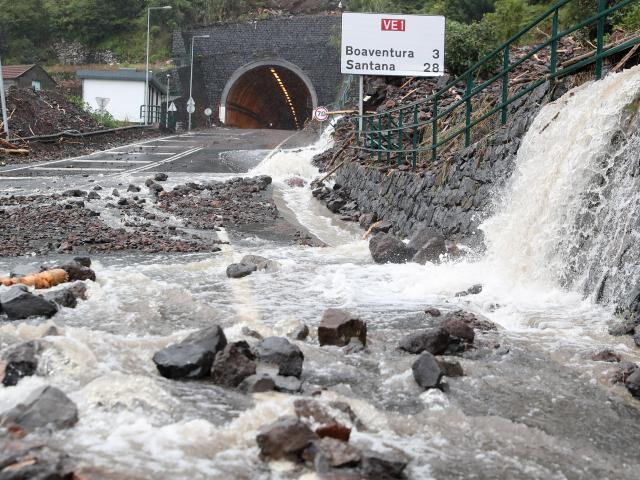 Via Expresso works may have worsened destruction in Ponta Delgada

Taking account of life and losses is what many residents of the parish of Ponta Delgada are doing this morning, a day that used to be a party in that locality in the municipality of São Vicente.

But the intense rains that fell all day yesterday brought with it a trail of destruction that left some homes in poor condition. It was in one of those houses affected by the storm that DIÁRIO found Miguel Freitas. The President of the Board notes that, for now, “what we can do at this moment is to give some comfort”, in addition to waiting for the water level to decrease and allowing further cleaning actions to proceed.

Even so, at this moment, many people are already on the ground, doing their best to restore some normality, both in the circulation of cars and in the cleaning of houses. The mayor highlights the availability of many people, volunteers, and other local authorities in the Region, namely Parish Councils and Municipal Councils.

Via Expresso works may have aggravated the situation.

“Whatever I can do as chairman and personally, I will do it, I will not hesitate for a second.” It was in this way that Miguel Freitas reacted to the trail of destruction that yesterday’s floods left in a dwelling in the lower part of the Ponta Delgada parish.

Its residents were indignant because, on several occasions, they would have alerted the authorities to the danger posed by the situation, asking for the usual course of the water line that had been intervened to be restored, which is the cause pointed out as being at the origin of the destruction they now face.

The President of the Board says that an intervention was made at the beginning of his first term, but it was not enough, since it is an area that receives a lot of water, particularly from the sides of Bonaventure. Miguel Freitas spoke of the need for more in-depth works when building the Via Expresso roundabout, something that will not have been done.

“I think that the intervention to be carried out should have taken place before some works that were recently carried out, especially in the construction of the roundabout [of Via Expresso], I think that this situation should have been taken into account. We at the time managed to increase the diameter [of the stream] and created a water reception area there, but obviously the amount of water that fell yesterday was an abnormal situation ”.

Umbrellas at the ready…

Regional Government does not accompany Funchal City Council in closing the beaches this summer.

Madeira Walking from Pico do Areeiro to Pico Ruivo