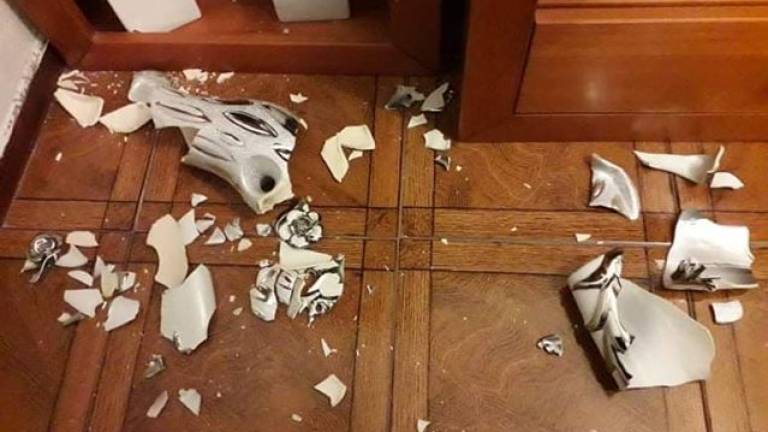 Madeirans tell how they reacted to the earthquake

Madeirans share on Diário Notícias Facebook page how they felt when the earthquake shook the Region for a moment. It was two minutes to nine at night when the earth shook. The magnitude felt was 5.1 on the Richter scale.

There are those who share stories of the earthquake, having remained undaunted and serene, many witness feelings of helplessness, fear and panic. Whoever was at home tried to protect themselves “under the door beam”, as Ana Sofia Luís tells, or “under the table”, as Ana Ornelas confides.

Some people stayed on the couch “scared” or, because they didn’t realize what was going on. This was the case with Catarina de Sousa. “My dogs started barking 10 seconds before, they felt it coming before I did. Incredible! ”He writes.

Cláudia Ornelas assumes that it was all very strange. “It started with a slight tremor as if a truck was passing by, suddenly increased in intensity and noise. Everyone stood looking at each other trying to understand what was happening and what to do. As soon as it passed, the kebab arrived and everyone started eating. To lighten the atmosphere, we made a toast ”.

Mário Camacho was on duty at Madeira Shopping. “The first thoughts were that the mall was collapsing, until I called home and realized that it was general. Clients all ran out the door, running towards the stairs and many to the elevators. See to believe!

Marlene Marques took “a while to believe that the earth was shaking”. He says the building looked like it was going to collapse. “I quickly joined my husband and son and we were stood under the doorway for a while! The scare was great! ”, she says.

Guida Silva was at home on the eighth floor. “When we felt we ran under the table and when we stopped we went to the street where there were already many neighbors”, she stresses.

Filipa Fernandes was at Eira do Serrado at a party. When she realized something strange “we didn’t know if it was going to be overturned or if it was an earthquake”, “she didn’t even know what to do”.

In the Estreito de Câmara de Lobos the floor shook so much that Graça Costa couldn’t even walk. “There were objects that fell on the shelves and the whole house shook for a few seconds. I felt the wooden beams in the attic creak and a lot of noise. The animals broke out in a tremendous uproar ”.

Teresa Freitas was watching TV and “suddenly the table shook, the window curtain started to move like the wind and a big noise was like a thunderstorm”. She admits to having panicked the same with Teresa Vieira. “It was at the time at a friend’s house, we panicked,” she says.

Maria Gustavo saw many people running from a bar in Jardim da Serra and falling on top of each other. “A big scare”.

Lucy Dos Reis was dining by the sea, at Praia Formosa. “Everyone who was there was scared. We paid and left immediately for fear of a tsunami ”, she confides.

Márcia Pereira was working at the Marmeleiros hospital. “it shook everything and I thought it was going to collapse and I was going to die there.”

Cláudia Moniz was in a shopping center and felt that it is serious “our society does not know the measures it must take to stay safe in situations like these”. “The rush and panic to run could cause more serious accidents. After the scare, the shopping center started to close stores and immediately started to be evacuated ”, he says.

Ana Sofia Marques felt nothing: “We were driving and thank God we didn’t feel anything, what caught our attention was seeing lots of people in the street in pajamas on the way home, and when we approached the neighbors and we had a sense of what had passed ”.

Victor Costa confesses to having had a feeling of inferiority before nature. “We are nothing, at any moment we can simply disappear. Scary ”, he stresses. Susana Campos saw “life going backwards in a few seconds”. And Su Silva was thinking “that we should always have a kit at hand” because “I was on the street and only thought about my husband’s important medication”.

Laura Rocha says that her 20-month-old son was in bed. “For him not to be scared, I pretended everything was fine and stayed with him while trying to figure out if it was an alarm situation or not.” Patrícia Pestana says that in Serra de Água, it was kind of confusing and scary. “We went out into the street and at the same time we heard the rock falling … I will never forget this night …”.

“It shook everything like gelatin and we went under the table”, confesses Leticia Reis.

Conceição Faria thought it was the washing machine twisting out of control, but she quickly realized that the machine was off. Then she ran off to the street by the stairs but I noticed that all the windows shaking and some of them have cracked glass.

During the fright, the good mood is also noticeable. Márcio Nóbrega confides that he got to know all his neighbors ! “It was nice,” he writes.

Effects of depression only until tomorrow

CHECK THE EVOLUTION RECORDED IN MADEIRA IN THE LAST 24 HOURS