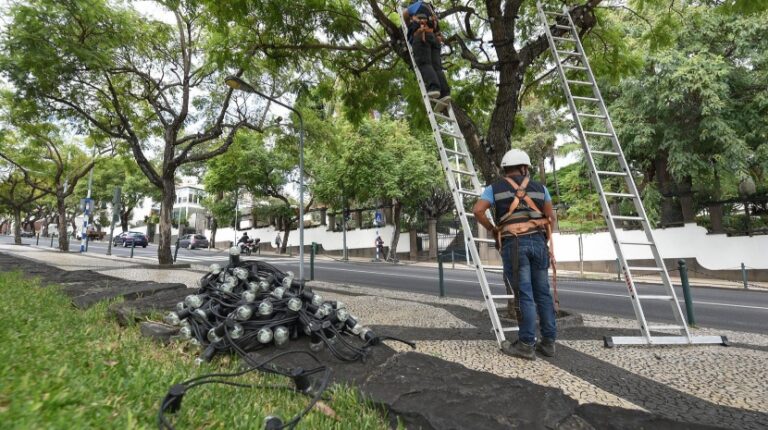 It’s almost that time where the Christmas lights come on all over the island.

The Christmas lights in the center and surroundings of Funchal, Madeira, will be switched on the 1st of December and will color the nights until January 11th, 2021, keeping the tradition alive, despite the pandemic of covid-19.

“There is virtually no tourism, but the lighting will have a very positive psychological effect on people,” Lusa Humberto Silva, from LuxStar, responsible for most of the municipality’s decorative lighting project, told the agency.

And he reinforced: “People are experiencing this moment [of pandemic crisis] beyond their normal state, so this show can alleviate that nervousness a little, because there is light, there is color, there is news.”

This year, the project is in charge of two companies, LuxStar and Teixeira e Couto, winners of public tenders launched by the Regional Secretariat for Tourism and Culture, which budgeted a budget of 3 million euros for Christmas, New Year’s illuminations and Carnival in Madeira until 2022.

“In the amphitheater alone, we will reach 130 kilometers of running cables and, in the center of the city, we have around 180 thousand lamps”, indicated Humberto Silva, highlighting, on the other hand, the assembly of large structures, like a tree 30 meters high and 14 tons of iron, at Praça do Povo, and the flag of the autonomous region, 100 meters long by 70 meters high, suspended on the João Gomes river bridge, more than 100 meters from the bed.

The city center was divided into four lots, distributed by the two companies, with Humberto Silva highlighting the light tunnel on the pier, a sphere on Avenida Sá Carneiro (marginal access to the port), and four artificial trees spread across Funchal – two with 10 meters high and two with 15 meters.

“It is not just a matter of doing a job to receive money, it also has something artistic in addition to work and perspiration”, he declared, stressing that LuxStar is responsible for the part considered to be the “essence” of the Christmas lights in Madeira, being also responsible for projects in Porto Santo, Câmara de Lobos and Ponta do Sol.

The in-line lighting of the Funchal amphitheater, the decoration of the trees on the city streets, gardens and roundabouts, as well as the lighting of the outlines, balconies and lintels of public and private buildings and of the three streams that cross the downtown are some of the characteristics that mark the Christmas season and are a great attraction for residents and visitors.

“I think that Madeiran Christmas is famous for the difference and the essence of what it presents and represents,” said Humberto Silva, stressing that, although it is important to keep up with technological developments, “there are things that it is not even possible to change”.

The assembly of decorative lighting in the municipality of Funchal began on November 11 and should be completed in full by Tuesday, December 1, the date on which the switch will be activated, marking the beginning of the Festival in Madeira.

THERE ARE 49 SUSPECTED CASES UNDER STUDY. 25 ARE RELATED TO CONTACTS WITH INFECTED

Travellers will see if price is right

SATA with more places from the Azores to Madeira on Saturday