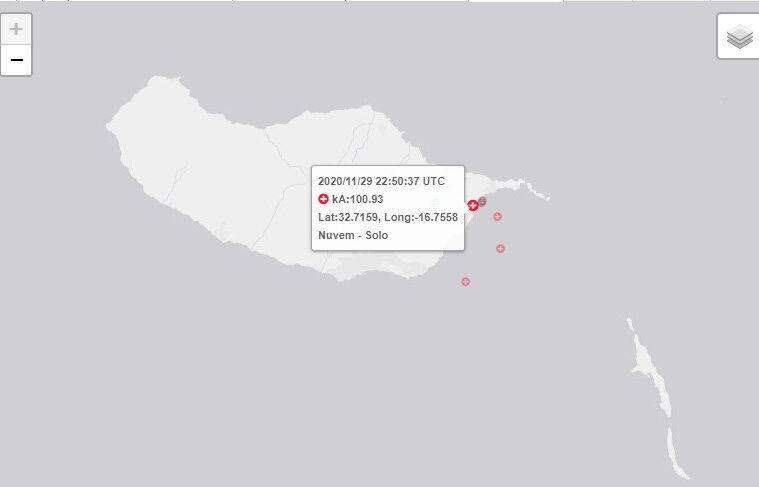 However, at 10:42 pm yesterday – according to data from the IPMA thunderstorm detector network – there was a cloud-to-ground ray, more specifically in Camacha, very close to Caminho da Portadinha (549 meters high). This type of lightning, which is the second most common, poses a greater threat to life and property as it hits the ground.

Thunderstorm causes small power cuts in several locations in Madeira
The thunderstorm and lightning caused by the ‘Clement’ depression caused, tonight, cuts in the supply of electricity in several locations in Madeira. There are confirmed blackouts in areas of Funchal, Machico, Santa Cruz, Ribeira Brava and Santana, but in most cases the energy returned after a few minutes.

Despite the risk, there are no indications yet that the lightning has caused major damage, however, reports from people report, especially in Santa Cruz, that their televisions turned off or malfunctioned. The lightning also caused cuts in public lighting.

In addition to Camacha, the IPMA also detected another cloud-to-ground ray very close to Machico bay.

It is recalled that at the end of July, the IPMA invested 319 thousand euros in the placement of four thunderstorm detectors in Madeira (3) and Porto Santo.

These detectors transmit in real time, through dedicated circuits with redundancy, the data recorded for the TLP (Total Lightning Processor) system and CATS (Computer Aided Thunderstorm Surveillance) system, for viewing and archiving the data detected and located by the set of the referred detectors.