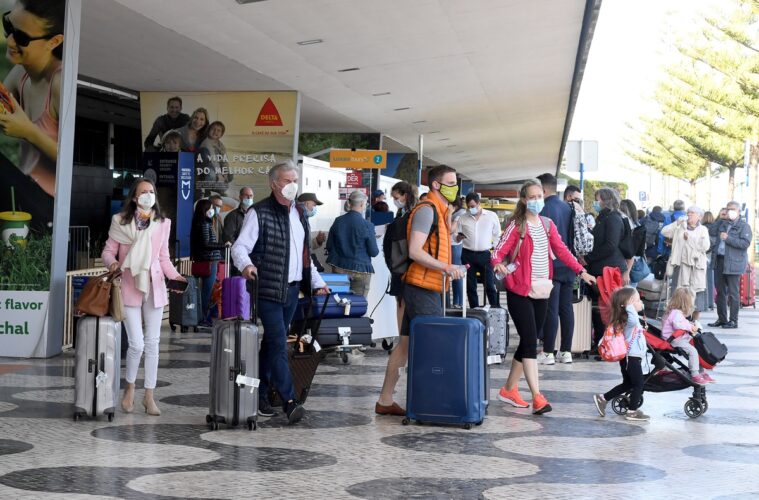 Tourists arrive, but Madeira can remain a safe destination

Are British tourists important to the resumption of Madeiran tourism, or is it a potential cause of an increase in cases of covid-19? Eduardo Jesus, regional secretary for Tourism and Culture, and Rogério Correia, Porto Santo Health delegate, agree that, while maintaining compliance with security measures, the region can continue to be a safe destination.

There were five flights from the United Kingdom that landed in Madeira this Monday, namely four at Madeira Airport – Cristiano Ronaldo and another at Porto Santo Airport. These five flights carried around 800 British tourists to the region, with most of them already carrying the negative result of the PCR test to the covid-19.

The arrival of British tourists to Madeira, after Portugal’s inclusion in the ‘green list’, is viewed with satisfaction, but not necessarily as ‘the salvation of Portuguese tourism’. Specifically in the case of Madeira, and although this market represents about 20% of Madeiran tourism, “it is not just the English market that interests us”, explains Eduardo Jesus, to the DIÁRIO. The bet is also placed on two other markets that make up the top3 in the issue of tourists to Madeira: the Mainland and Germany.

This does not exclude the importance of the British market, which “has a decisive weight.” The summer is expected to be busy in terms of flights from the United Kingdom: “We are currently operating with four origins in the United Kingdom and we will move to 12 airports of origin in June, increasing the offer of seats to Madeira by 7,500 to 19,000 in the month of June. ” The frequencies go from 36 and 4 to 93 and 10 for Madeira and Porto Santo, respectively, next month.

The United Kingdom is, in fact, the most important foreign issuing market for Madeira, surpassed only by another: the national market, which “last year was worth a lot to us and reached the top of the hierarchy in terms of contribution to the sector. of tourism. ” For this, “a great job on our part” was done, alongside national tour operators and the Portuguese Association of Travel and Tourism Agencies (APAVT), which named Madeira as a ‘Favorite Destination’ in 2021.

June then offers a total of 73,000 seats between the Continent and the region. Special attention to Porto Santo, which will have six charters organized by the main Portuguese tour operators. “From the indications we have, Porto Santo will be very close to the maximum capacity during the summer. We will have a very strong summer in Porto Santo”, says Eduardo Jesus.

Third is Germany, “which in June will already offer 12,500 seats on a plane, with 65 flights that month.” According to the minister, “Germany is responding well, but with great growth potential, and that is what we are working on.” In all, and only from these three markets, “we are talking about more than one hundred thousand places made available to Madeira, more than 600 frequencies in the month of June, guaranteeing access through 21 different airports.”

Covid-19 is controlled by maintaining certain behaviors, asked by the DIÁRIO, Rogério Correia, Porto Santo’s Health delegate, assured that “the arrival of British tourists to Porto Santo is going very well.” According to the official, most English tourists arrived on the island with a PCR test already carried out, with the airport’s screening system having lasted about 40 minutes in total.

“Of the more than 100 passengers who arrived yesterday, only two were tested in Porto Santo”, he explains. These two passengers arrived in the region with negative antigen tests and were asked to carry out the PCR tests required by the Regional Government, which also turned out to be negative.

Rogério Correia thinks that “controlling cases in the summer will be hell”, with the early arrival of charters and scheduled flights from foreign countries, compared to the 2020 operation. Still, he asserts that “we already have some skills.” He explains that “the percentage of risk of new cases arising, in view of the absolute number of people on the island, but this only means that we must continue to have the care that we have had until now.”

The Porto Santo Health delegate praises the local population, who “has shown all the right behaviors”, which is why the island should return to zero covid-19 cases very soon. If these behaviors continue, “we are going to have a safe summer and present a safe destination again.”

There were several comments from users of social networks, in the news of various media that announced the arrival of British tourists to the country, who expressed some fear in relation to this ‘flood’. The United Kingdom started a new phase of deflation yesterday, somewhat overshadowed by the rise in the country of cases of the coronavirus variant discovered in India.

This is precisely the fear of Portuguese citizens to open the doors of their country, and in particular of Madeirans. However, Eduardo Jesus appeases: “I believe that it is the public perception that there is a system of control and screening that allows us to achieve the confidence not only of those who visit us, but also of those who live here.” The regional secretary for Tourism and Culture speaks of the “relentless screening” that is done at airports in the region as a source of confidence.

For the government official, “all this allows the population to rest.” Still, he recalls that it is “we have to live with this balance and it is important that each one continues to comply with the recommendations of the authorities.” It is in this way that the tourism sector can revive in the region, at the same time that it remains a safe destination, for tourists and for its own population.

The stampede of tourists from the United Kingdom to Portugal is due to the insertion of our country in the ‘green list’ of the Boris Johnson government, which allows non-essential trips to Portugal, without the need for a quarantine period on the return. Portugal opened its borders to these tourists this Monday, May 17th, by presenting a PCR test carried out on the previous 72, with a negative result.

The doors are open between the two countries and the ‘green list’ will remain unchanged for the next three weeks. In other words, during the coming weeks, the focus is on Portugal. The traffic light is green only for 12 destinations worldwide. Favorite holiday destinations for UK citizens, such as Spain, Greece, Italy, France, are on the ‘yellow list’ of places “where you shouldn’t be traveling.”

Traveling to countries on the ‘amber list’ implies taking a test before returning, as well as scheduling (and paying) two other tests, two and eight days after returning, plus a period of prophylactic isolation at home, in total 10 days. There are several European destinations asking the United Kingdom to reconsider the list, including neighboring Canaries, which with a different epidemiological situation on the Spanish continent, believe that the archipelago should be analyzed separately.

The United Kingdom’s Secretary of State for Transport, Grant Shapps, asserted on 7 May, when announcing the destinations that made up the ‘green list’ from 17 May, that “I do not think that we will add new countries soon ”, Supported by Prime Minister Boris Johnson, who said that he did not foresee adding new destinations to this list“ in the near future. ”

Attentions are therefore centered in Portugal. More specifically in two destinations with which tourists from the United Kingdom have a long-standing relationship: Madeira and the Algarve. About 800 passengers arrived in Madeira yesterday, in the Algarve there were over 5,500, who arrived in 17 flights, which landed at Faro Airport throughout the day. In addition to these two regions, six flights also arrived in Lisbon and another three in Porto, also from the United Kingdom.

In response to this increase in demand, there are already several announcements of increased frequencies by different operators. This week it was the turn of the Portuguese TAP to report that the volume of reservations from the United Kingdom to Portugal more than doubled last week, compared to the previous week, in a 131% growth. For this reason, the airline increases the number of flights between the United Kingdom and Lisbon and Porto, not to mention any changes to Madeira.

Last week, immediately after the announcement of the new ‘green list’, TUI was talking about an exponential increase in demand for Portuguese destinations. He then added flights to the Algarve and Madeira. To the island region, there are more flights a week from London Gatwick and Manchester, on Friday, from 21 May to 29 October, and the addition of two weekly connections to Birmingham, every Monday and Friday, also up to 29 of October.

Of the four flights that arrived yesterday at Madeira Airport – Cristiano Ronaldo, three were from TUI, precisely from the destinations mentioned above. The other flight from the United Kingdom came from London-Heathrow aboard a British Airways plane. TUI was also the airline that landed yesterday at Porto Santo Airport, taking 130 tourists from London-Gatwick to the island.

In a post on its official Instagram account, TUI UK shared the happy moments of yesterday’s arrivals in Madeira, with the description: “It’s good to be back! We had an incredible day, we returned to the skies for the first time in months. ”