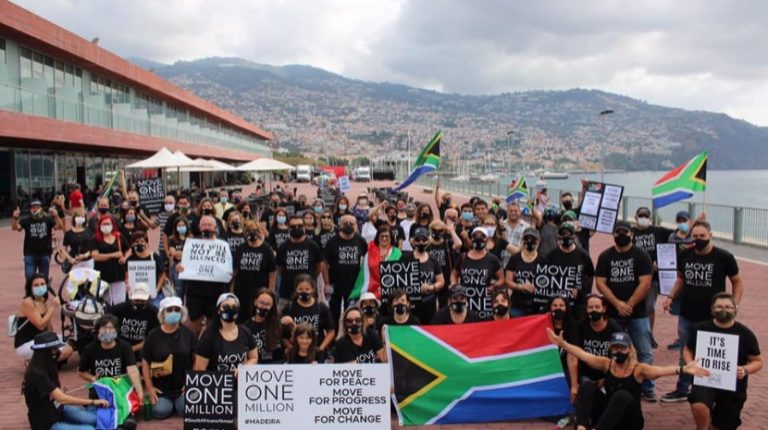 South Africans in four cities in mainland Portugal and on Madeira Island participated in a Global demonstration last Saturday, September 5, 2020.

The cities of Lisbon, Porto, Algarve and Funchal brought together more than 250 people who demonstrated with pride and in solidarity with the people of South Africa. Portugal is on the list of 16 countries that supported the movement on Saturday, September 5, showed to the world that South Africans have joined in a respectful and peaceful way by transmitting the movement’s messages.

With supporters, dressed mainly in black with the Move ONE Million logo, Springbok Tshirts, South African flags and various posters with messages that the movement wants to convey, the day started with a universal minute of silence for those who see themselves lost in the struggle for survival under the current government. South Africa’s national anthem has been played and speeches delivered, raising a number of adversities that South Africa is trying to combat in order to move forward as a nation. In each city, the spirit of trust was appealed for positive change and danced together and as a pride to Jeruselama from Master KG.

The movement appealed to the diverse origins of its people and the fear and sadness they face daily. The speeches stood out around the Direct Elections being the main objective for the mobilization of the movement.

Ensuring that the citizens of the Republic of South Africa have a voice and can hold government officials accountable for the series of atrocities the nation faces daily, the direct source of the problem being mismanagement of government funds. People seek penalties for abuse of trust and obligations violated by government officials. The movement, founded by Jarette Petzer and Joanita Van Wyk, is working on mass campaigns for direct elections.

In June 2020, South Africa’s Supreme Constitutional Court ruled that the current Electoral Law is unconstitutional, as it does not allow individuals to stand as independent candidates in local and national elections. This campaign aims to enable South African citizens to remain united to ensure that all relevant changes are made to the Electoral Law within the 24-month period issued by the court.

After Saturday’s demonstrations, Petzer said, “South Africans demonstrated with respect, love, integrity and unity. It was very encouraging, and we will continue to do that. The power was electric, and the vibration and atmosphere were great. International support was massive. Thanks to every person who has been with us around the world, it was amazing to have such amazing people by our side representing us, and that is very encouraging for the next one. We need to grow, enjoy and strengthen as we move forward and we can only do that with our members.

“South Africans living abroad have organized several protests and meetings to show solidarity with the movement in more than 16 countries, including Portugal, Mexico, Cyprus, Greece, Germany, Italy, Belgium, Netherlands, Norway, Switzerland, Emirates United Arabs, United States, Canada, New Zealand, Australia, Uganda, Madagascar and the United Kingdom A message of sincere gratitude to the national authorities, and to the municipalities for their presence and professionalism, last Saturday.

Move ONE Million International is in discussions about the next demonstration to be jointly outlined with South Africa on October 24, 2020. Details for Mainland Portugal and Madeira will be released as soon as possible.