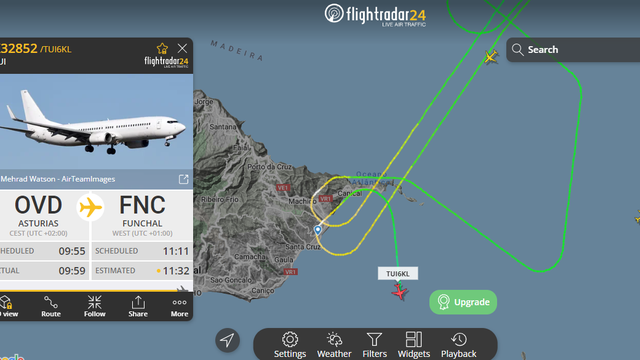 The TUIfly plane that this morning diverted for Asturias Airport, in Oviedo, Spain, while making the connection between Dusseldorf, Germany, and Madeira. The flight then came back to Madeira but was unable to land at Madeira Airport and was diverted again, this time to the Canary Islands.

After the unexpected stopover in Spain, which lasted just over an hour, the Boeing 737 resumed its journey towards Madeira, failed two attempts to approach the runway, now heading to the Canary Islands.

Meanwhile, the last update (until 11:30) of the air movement scheduled for this Tuesday at Madeira Airport, accounts for six canceled flights, between arrivals and departures. Four from easyJet (Porto and Lisbon) and two from Ryanair (Lisbon). There is also another diverted flight, the Porto – Funchal connection operated by Transavia, which has just landed in Porto Santo after failing to land in Santa Cruz.

Although conditioned by the wind that still blows strongly, the air movement, even with some constraints resulting from delays, resumed some normality after 09:00.

Summer temperatures from sea to mountains

Where am I answer

21 New Cases for this Friday.