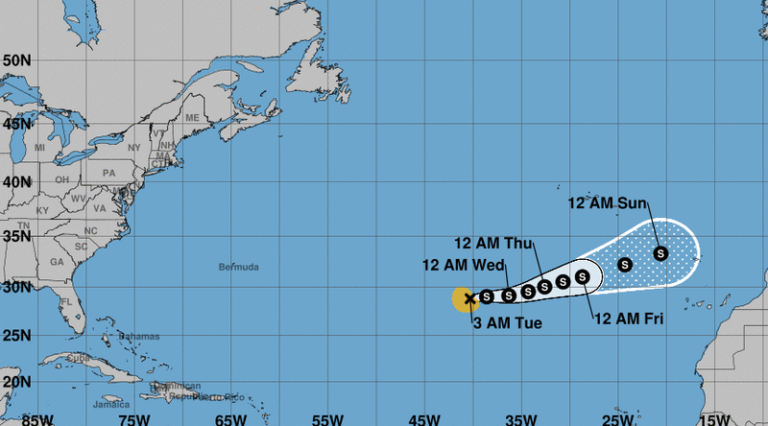 A history-making storm is gaining momentum over the middle of the Atlantic.

Monday, Subtropical Storm Theta became the 29th named storm of the year, surpassing the 28 storms of 2005 and making the 2020 hurricane season the busiest on record.

2005 saw the big storms Katrina and Wilma, which many people will remember well.

The system is not expected to make landfall in the U.S.

As of 10 p.m. ET , the National Weather Service reported Theta is moving east through the Atlantic with maximum sustained winds of 50 mph with higher gusts.

Forecasters say some slight strengthening is possible during the next 12 to 24 hours followed by little change through Thursday.

Theta was named after the eighth letter of the Greek alphabet, which forecasters turn to when they run out of regular-season names.

The World Meteorological Organization sets a total of 21 alphabetical names for each hurricane season, with each name used only once every six years. (The naming convention skips over Q,U, X, Y and Z.) In 2020, that meant forecasters had to turn to the Greek alphabet after Tropical Storm Wilfred.

It’s only the second season the WMO has run out of alphabetic names, the other being 2005.

Eruption of volcano in La Palma far from over

The Most Amazing Video of Madeira

Work will start next month on Hospital Marmeleiros

An enjoyable event at Garcias