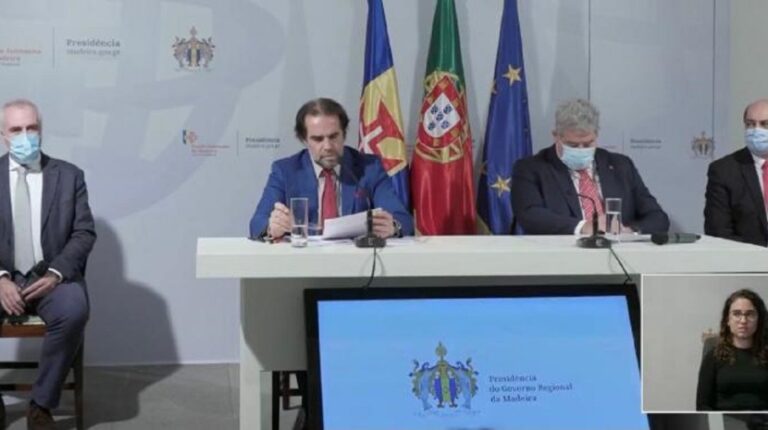 Yesterday’s News Statement from the Government

Thanks to Daniel Caires for this, and it’s just a translation from Portuguese.

Some topics of the statements made by the President of the Regional Government of Madeira – Miguel Albuquerque.
(Monday, December 21)

It is important to avoid alarmism and not to increase false information that does nothing to control the situation.
It is understandable that citizens are saturated with this situation, but now that a vaccine is in sight, we cannot afford to lose everything.
We can no longer ask the health teams that continue to work, for long months, 24/7 in a courageous and determined way.

In the Region there are 48 active transmission chains, 33 of which with more than two identified cases. So far, there is no community transmission as the health authority continues to identify, control and oversee all local transmission chains.
The clinical pathology laboratory of SESARAM has already carried out more than 205,170 tests, a remarkable work by this team of professionals. In the mainland laboratories hired by the regional government of Madeira, 46,513 have already been carried out, of these 252 with positive results for covid19. What prevented them from having landed in Madeira.

The testing average, at the moment, of the regional laboratory is over 2000 tests per day. At the beginning it was 50.

On double testing, anyone will have to stay in isolation for at least 5 days, until they are called for the second test. Contacts are made for the contact you left on “madeirasafe.com”.
Since December 2, 6011 “second tests” have been scheduled. Of which, 3779 tests have already been carried out, with the rest scheduled. In this double test, 11 positive cases were verified, which helped to prevent new transmission chains.

The inpatient unit for Covid-19 positive, with 65 beds, currently has only 20 occupied. 45 are available and in the covid-19 suspect unit, with 25 beds, of which 10 are occupied. Both of these autonomous areas can be increased at any time, if necessary.

Regional Government recommends: that family gatherings and gatherings are limited to the household, that is, to people living in the same house. Business dinners and dinner groups of friends should not be held, and travel outside the Region should also be avoided.

Passengers from the United Kingdom, whether Madeiran or not, will wait for the first test in mandatory prophylactic isolation in a hotel establishment requested by the Regional Government for this purpose. And the second test, at your home since you do the isolation or at the designated hotel.

Regarding the pfizer vaccine, they will arrive in the first week of January and correspond to 9750 doses that week. The refrigerators to store the vaccines have already been purchased and are already in the Region. (vaccination plan presented shortly).

The Regional Government will carry out a genetic analysis to see if the most aggressive variant of the coronavirus, detected in the United Kingdom, has been in the Region. The work will be done in partnership with the Ricardo Jorge Institute.

Answers to some questions from journalists:

Miguel Albuquerque says that the vast majority of bars and restaurants are complying. Supermarkets and shopping centers are failing. “We are seeing a lot of carelessness. I will alert the shopping centers. If they do not respect, close everything!”, Says the President of the Regional Government, who warns of the consequences that may arise if we do not take care. “They are already warned that if the temperature is not measured, if the distance is not maintained, we will end everything!”, He warns.

Banning the landing of 43 English passengers was “overzealous” – As for the ban on landing, this morning, of 43 passengers not resident in the Region, Miguel Albuquerque explained that the Region had prepared  “a room with the greatest comfort” to where passengers could move. However, SEF decided that passengers should stay on the British Airways plane. “All of this is very unpleasant and is not in line with our tradition of hospitality,” said the President of the Regional Government, who argues that the whole situation was “overzealous”.

Restaurants close at 11 pm. At 24 hours, the bars close. On New Year’s Eve, bars close at 1 am. “It is better to have this possibility than the one in which there is nothing and at 11 pm everything is closed”, explains the President of the Regional Government. Miguel Albuquerque, therefore, maintains the measures that he had already announced for this sector. At least for a while. He continues to warn that if the numbers of infections and the attitudes of the Madeirans demand it, everything could change at any time.

Miguel Albuquerque argues that the situation of people who travel to Madeira and do not comply with mandatory confinement “is an absolute irresponsibility”. Asked about the situations in which students arrive in the Region and, even before receiving the result of the first test, participate in meetings with friends and family, the President of the Regional Government believes that this is an issue in which “the police must act ”.

The President of the Government calls on everyone who can watch the fireworks at home to do so. He warns that viewpoints, squares and Avenida do Mar will have control so that social distance is maintained. In a video conference that is still taking place at Quinta Vigia, Miguel Albuquerque admits that there is no capacity to control all areas, but only that they are known and that people like to look for.

Regarding the case of the pilot Miguel Campos, Miguel Albuquerque announced that the health services “have already instituted criminal proceedings” against the individual. “Nobody can understand how such a situation is happening,” said the President of the Regional Government. It is recalled that the driver is accused of having given a rally driver course in Madeira when he was infected with covid-19

Wizz Air on its way to Madeira despite travel ban