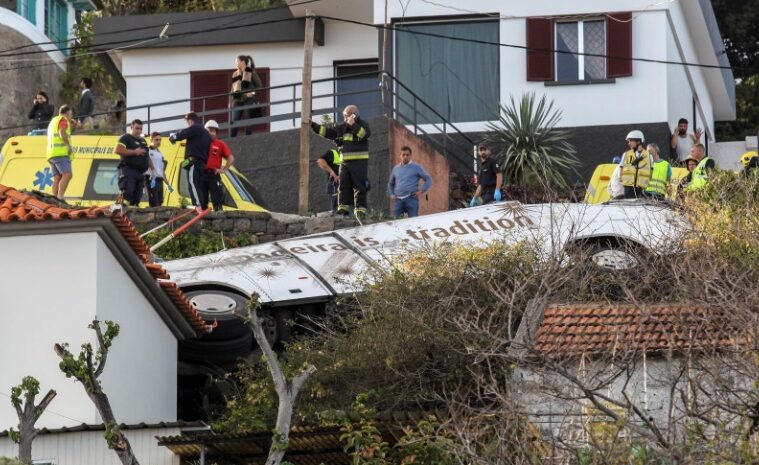 Two years ago, the Government of the Republic and Madeira decreed three days of mourning for the 29 deadly victims of the accident with a tour bus that took place on April 17, 2019, one of the most tragic on Portuguese roads.

The bus departed from a hotel in Caniço, in the municipality of Santa Cruz, with 56 people on board – 54 German tourists, the guide and the driver, both of Portuguese nationality – bound for a restaurant in Funchal, for a typical dinner.

The accident occurred around 6:30 pm, on Estrada Ponta da Oliveira, a short distance from the hotel, when the bus lost its way in a ravine, rolling on a terrain, until it reached a house, which was partially destroyed.

The disaster left 29 dead – 17 women and 12 men – all of German nationality, and 27 injured, including the guide and the driver, who was later accused by the Public Ministry of the “practice of 29 crimes of homicide by negligence “, as the technical experts did not detect anomalies in the vehicle.

The Regional Civil Protection Service of Madeira activated “all means” to provide assistance, in an operation that involved 19 vehicles and 49 operational, with the accident bus being removed from the site at 06:00 on April 18th.

Of the 25 wounded Germans, 11 were discharged in the region and 13 were transferred to Germany on April 19 and 20, 12 of which on a hospital plane in the country’s Air Force.

The transfer of the last wounded person of German nationality took place on April 24, and from that day on, only the driver and guide, who was in serious condition, remained at the Dr. Nélio Mendonça Hospital in Funchal.

The tragedy with the tour bus in Caniço motivated the visit to Madeira by the President of the Republic, Marcelo Rebelo de Sousa, on April 19, who visited the wounded and the accident site, where he placed a wreath.

Marcelo Rebelo de Sousa also participated in a ceremony to honor those who died, which took place at the Presbyterian Church of Funchal, then moved to the Cathedral, where he participated in a Catholic ceremony.

The day before, on April 18, the Portuguese and German foreign ministers, Augusto Santos Silva and Heiko Mass, had also visited the accident site and the hospitalized wounded.

The president of the Regional Government of Madeira, Miguel Albuquerque, was not present, because he was on vacation in Dubai, but on his return, on April 23, he explained that he tried to return to the island, which “was impossible” due to the lack of a flight. , stressing that he had accompanied the rescue operation “over the phone”.

On the same day, the Legislative Assembly of Madeira unanimously approved a vote of condolence for the victims of the accident, expressing “dismay and deep sadness”, and on April 24, unanimously approved two votes of praise (from the PSD and the CDS-PP) to the Civil Protection Service, the Regional Health Service and all the teams that participated in the rescue.

On December 19, 2019, the District Attorney General of Lisbon (PGDL) reported that the Public Prosecutor’s Office had requested the trial of the bus driver “for the practice of 29 crimes of negligent homicide”.

According to the PGDL, the request for a trial, in a collective court, also refers to three crimes of physical integrity for negligence.

The District Attorney General of Lisbon clarified that the Public Ministry and the Public Security Police (PSP) collaborated in the investigation and in the collection of evidence of this accident.

Also the Judiciary Police and the Institute of Legal Medicine, whose team was reinforced at the time, proceeded to identify the victims, aiming at the speed of the process.

The inspection of the bus was carried out by the Faculty of Engineering of the University of Porto.

As the victims were mainly German, the judicial authorities of the Federal Republic of Germany collaborated in the investigation for the future memory of the victims residing in that country, under the European investigation order and EUROJUST.