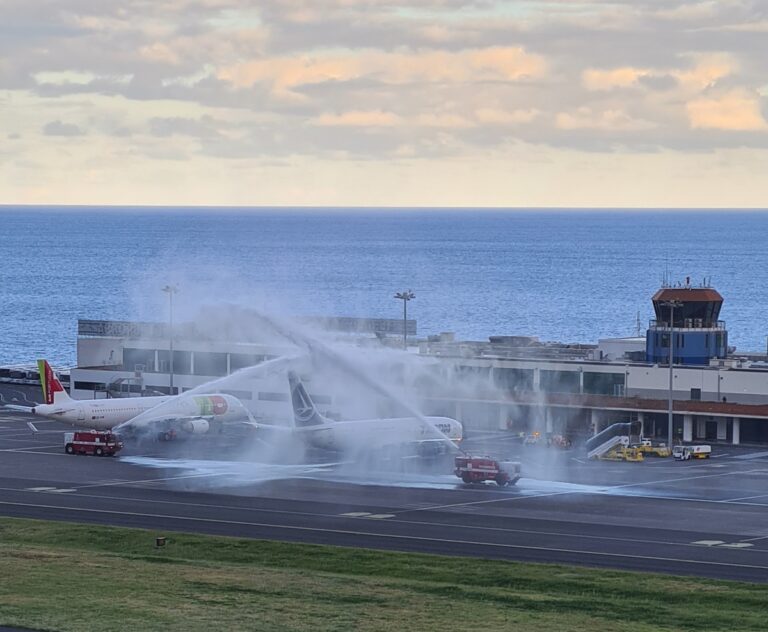 Madeira Airport received today, around 8 pm, the first flight of the new connection from Bucharest, through TAROM, a Romanian airline that operates a network of domestic connections in Romania, in Europe and international services to the Middle East and Africa.

According to a note from ANA – Aeroportos de Portugal, “the new Bucharest – Madeira route corresponds to the opening of the region to a new market, affirming the development of aerial connectivity in Madeira pursued by ANA Aeroportos de Portugal. This will be a weekly connection operated with a Boeing 738 with the offer of 189 seats, and it is estimated to operate until the end of the summer “.

“Today we have reasons to celebrate at Madeira Airport with the inauguration of the new direct connection from Romania, Bucharest. With this new operation, we also received a new airline: TAROM, a state-owned, Romanian-flagged airline. Links with Eastern Europe have assumed extreme importance in the development of new markets for Madeira, with increasing demand. We welcome this new airline, with the wish of sustained success for the future ”, says the Chief Commercial Officer of ANA Aeroportos de Portugal, Francisco Pita.

The Regional Secretary for Tourism and Culture and President of the Madeira Promotion Association, praises the new operation of TAROM, which is now taking shape as a result of the efforts of the tour operators ‘Eturia’, ‘Karpaten’ and ‘DER Romenia’, which “comes to reinforce the growth in demand for the Madeira destination in the eastern market, which is very satisfying to us ”. Eduardo Jesus emphasizes that the Region, “in addition to continuing to invest in traditional markets, is also working to capture all the available resources that arise”, he adds.

The official recalled, in this context, the example of Poland that “has been one of the most consistent markets for Madeira in the present pandemic context, having kept this route active, despite all the restrictions verified”.

At 7:55 pm when the plane landed, there was the tradition of water cannons at the TAROM premiere, which in 2015 had been here with an A310, but on a charter flight. This is a Boeing 737-800, according to reader José Freitas, author of the photo.

Official Promo Video for the 10th edition of MIUT