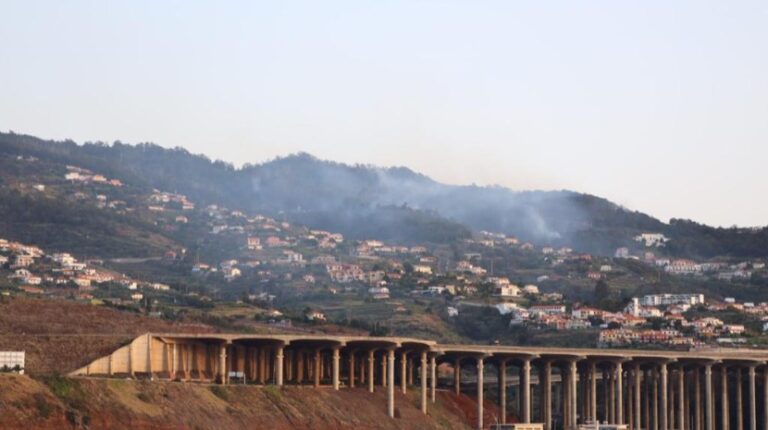 THE FIRE THAT BROKE OUT IN MACHICO IS NOW UNDER CONTROL. FIELD FIREFIGHTERS UNDER ACTIVE SURVEILLANCE

The situation in Machico and Santa Cruz is now much more controlled, confirmed this morning a source from the Municipal Fire Department of Machico to JM.

Until the early hours of the morning, the fire continued to spread and even threatened several homes. However, and according to Henrique Maciel, commander of the corporation, the fire was controlled in the last hours, and the firefighters on the ground are now ensuring active surveillance. At this point, a few Firefighters remain in place to keep an eye on the situation.

The commander of the Municipal Fire Department of Machico explained that the external means were demobilized at 7 am this morning. It should be recalled that, in addition to the Machiquense corporation, there were also several operatives from three other corporations in the fight against the flames – Bombeiros Voluntários Madeirenses, Bombeiros Voluntários de Santana and Bombeiros Sapadores de Santa Cruz – which, in the meantime, have already returned to their respective barracks.

However, the commander also warned of the high temperatures that are also planned for today, stressing the need to continue with surveillance on the ground and ensure more means of prevention.

Yesterday, at the end of the afternoon, the operational device included 41 operational, supported by 13 land and one air means. In the theater of operations there were also elements of the Forest Police Corps, National Republican Guard, Public Security Police, Municipal Civil Protection Service of Machico, and the Regional Command of Relief Operations of the Regional Civil Protection Service.

Marcelo admits state of emergency until May 1

Exploring & Racing on the Portuguese Island of Madeira

COVID-19 causes another death in Madeira

A wet Christmas then turning colder