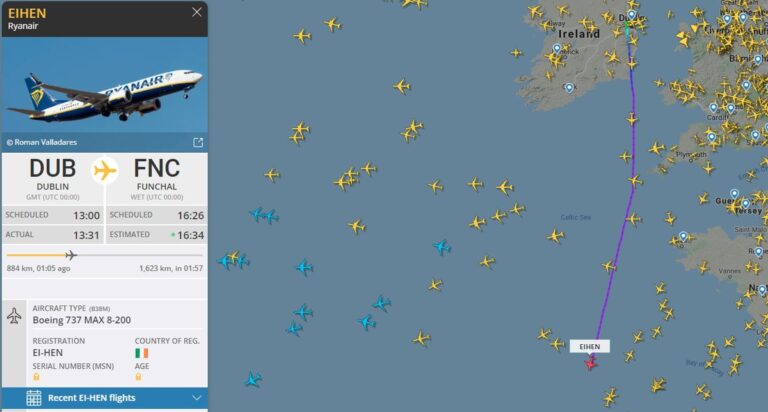 Ryanair Boeing left Dublin and lands at 4:25 pm in Madeira

Ryanair’s Boeing 737 MAX 8-200 is already on its way to Madeira, where it should land in just under two hours.

The device left Dublin at 1:31 pm, the same time as in the Region and is an absolute debut at Madeira Airport.

The low-cost airline will be preparing an operation to be mounted this winter, as António Trindade had already announced, at the TSF-Madeira Week Debate, in June this year.

At the time, the businessman guaranteed that Ryanair came to ask for numerous ‘slots’ to fly to Madeira, surpassing TAP and easyJet.

The Diário/TSF-Madeira sought a reaction from the regional secretary for Tourism, Eduardo Jesus, but the official sent statements for this Tuesday, at 11:30 am, the day when a press conference will take place in the morning at Madeira Airport , on route development. The CEO of Aeroportos e Navegação Aérea (ANA) and the president of the Regional Government will be present.

RUI UNAS DIVED INTO THE AQUACULTURE CAGES IN CALHETA

Driver only worked 8 hours, says the company, which shows timesheet