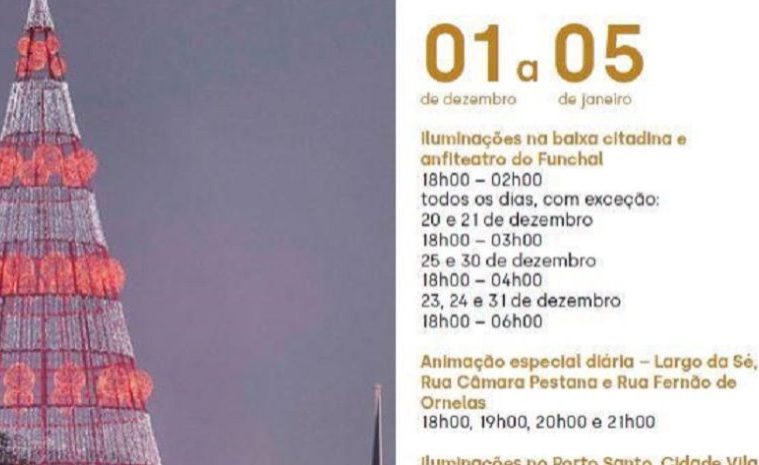 The Regional Directorate of Tourism issued a statement stating that Christmas lights closed at dawn on 6 January.

Here is the full transcript of that note:

“The Regional Directorate of Tourism informs that, contrary to what is published today by the Diário de Notícias – Madeira, on its last page, the official program of the Christmas and New Year Holidays details the dates and times of the respective openings regarding the illuminations. This program was sent to all entities related to the sector, hotels, travel agencies, tourist entertainment companies, among others, and is also available on its website and printed and distributed at various tourist offices.

Effectively, according to the announced time, the lights closed at 2 am on January 6, and thus coincided with the end of several planned initiatives, namely Cantar dos Reis, which took place on the night of January 5. in the Municipal Garden.
It is reported that at the end of the night, the press office told the DN journalist about the closure of the illuminations that was always scheduled from 5 to 6 January and on 6 night no longer illuminated.

With the closure of the lightings and all the initiatives, the Regional Director of Tourism shows that all the objectives set for the Christmas and New Year 2019/2020 festivities were achieved.
Dorita Mendonça points out that Madeira, as a tourist destination, stands out at this time of year, with a strong focus on the celebration of Christmas and New Year holidays, and the lighting and firework are major investments in the Calendar. of Regional Tourist Animation “.

So there seems to be a lot of confusion over this and not sure where the blame is, we all know how useless the Tourist Board are and it seems many places were advertising the lights up until he 8th December.

I received this message from Angelita Ribeiro who works in the Tourism Sector.

Hello just want to inform that despite the Secretary of Tourism saying the lights would switch off yesterday at 2h we had our restaurant full  of complaints people saying that even hotels informed that the lights would be still on yesterday evening….
Myself and a full bus from the Yellow Bus Company were counting seeing last day off lights and they had on ticket and publicity last day being yesterday….it was quite a deception…
Lights have never in Funchal switch off  so early … Normal until 7/8…. Yesterday is still traditional Festivity with Dia de Reis who go out at night and Funchal was full with people and no lights, no barracas….very very bad insight for Tourism and 2 huge Cruise ships in the harbour…
Would appreciate you write on Facebook…its important people don’t stand still….we are suffering with politics…we live on Tourism and they are aiming to its Destruction..
I manage a Restaurant and work for Tourism. You cant imagine the disappointment our guests (OH YES I CAN) during the last years 2017/2019 showed for all the stupidity made by Tourism…. Flower Festival…disgrace Christmas lights… The June Firework Festival with no dates until on top of event and with expensive flights…and so on…
We have guests coming for 15 years they say never have seen such disorganisation….
And good restaurants are suffering consequences…they are not coming back…. With what they pay here they are choosing other destinations.
I just want to see if people wake up… This Tourism board is a disgrace.
Many more of you have left comments and emailed me expecting the lights on last night, and with the amount of people being about especially with two cruise ships in, and also it being the Day of Kings, they should have been on a little longer.
If you still need a Christmas light fix, Santa Cruz is amazing and these lights will stay on till the 15th at least.