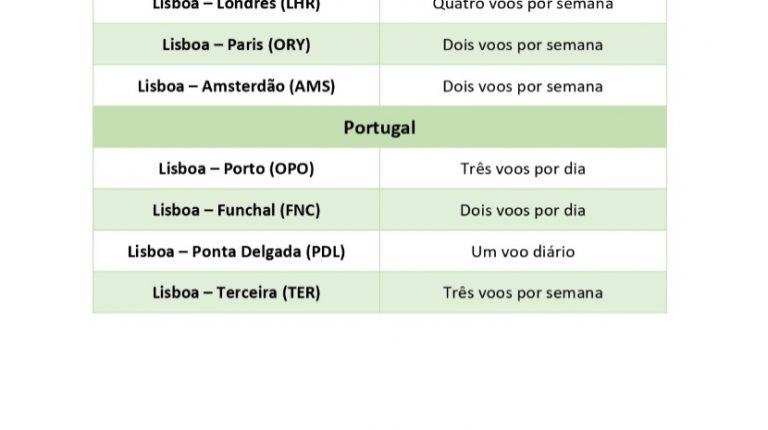 TAP will reduce its operation from Monday to April 19, a period during which it only expects to fulfill 15 of the approximately 90 destinations it operated, the company revealed.

In a communication sent to the Portuguese Securities Market Commission (CMVM), the Portuguese air carrier says that this decision “can be revised at any time, whenever the circumstances so require”.

TAP explains that its decision arises as a result of restrictions imposed by the various States in the geographies in which the company operates, “which have been configured as the main measure to contain the global spread of the Covid-19 pandemic”, the disease caused by the new coronavirus.

“Such restrictions, combined with the sharp drop in demand, have been generating successive flight cancellations and route suspensions, resulting in a reduction in the global volume of air traffic in recent weeks”, explains the airline.

In a press release, TAP says that in the last 24 hours there have been “significant developments in the conditions mentioned above” and explains that it will “significantly reduce the operation and park a large part of its aircraft fleet”.

“TAP will ensure flights on all routes where they are possible, in order to respond to the mission of transporting its customers to their families”, he adds.

“We are working on the continuity of our business, convinced that we will soon return to the normal pace of our activity, always with a focus on the future, sustainability and growth of our TAP. We thank our employees for their commitment and sense of mission at a time when everyone has done their best to take care of our customers and Portugal ”, says TAP’s executive president, Antonoaldo Neves, quoted in the statement.

With this decision, between March 23 and April 19, TAP will only make three flights a week to South America (São Paulo) from Lisbon.

In North America, it will make two flights a week from Lisbon to Newark (EWR), Boston (BODS), Toronto (YYZ) and Miami (MIA) and, in Europe, it will fly twice a week to Luxembourg (LUX), Geneva (GVA), Frankfurt (FRA), Paris (ORY) and Amsterdam (AMS). To London (LHR) TAP will fly four flights a week, always from Lisbon.

In Portugal, TAP will have a daily flight from Lisbon to Ponta Delgada, two to Funchal and three to Porto. It will also make three weekly flights from Lisbon to Terceira island (Azores).

The Portuguese airline had already announced this week that it would reimburse, with the issue of a ‘voucher’ valid for one year, customers who want to cancel trips starting until May 31.

Alternatively, TAP allows customers to “change their reservations for trips starting on May 31, rescheduling the new trip to any destination and for a date until December 31, 2020”, the company said on Tuesday .

Last week, the airline had already announced that it would extend the situations in which it allows changing dates and destinations on its flights, without penalty, taking into account the impact generated by the Covid-19 outbreak, according to a statement.

The new coronavirus, responsible for the Covid-19 pandemic, has already infected more than 210,000 people worldwide, of whom more than 8,750 have died.

Of the infected people, more than 84,000 have recovered from the disease.

In Portugal, there are 642 confirmed cases of infection and two deaths.

The Assembly of the Republic approved on Wednesday the decree declaring the state of emergency submitted to it by the President of the Republic with the aim of combating the Covid-19 pandemic.

The state of emergency proposed by the President extends until 11:59 pm on April 2, according to the decree published Wednesday in Diário da República, which provides for the possibility of compulsory compulsory confinement of citizens at home and restrictions on road traffic public, unless justified.

The measures that materialize the state of emergency will be approved today in the Council of Ministers.

Italianissimo The Perfect Italian. Save 10%

I will leave you with this.