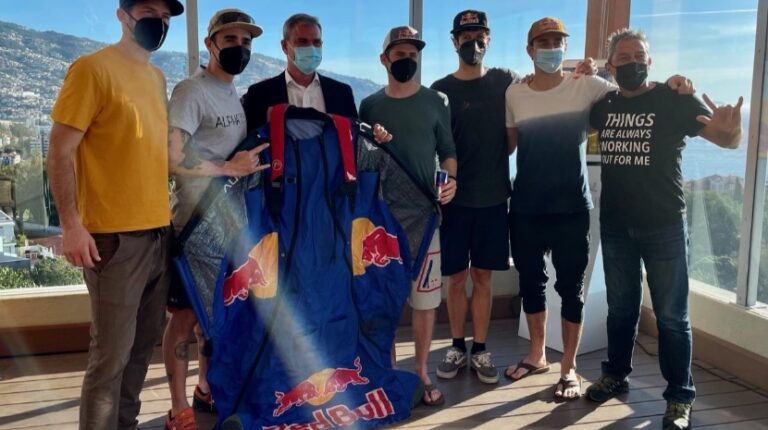 It was one of the surprises of New Year’s Eve. Before the fireworks show, the ‘Red Bull Madeira NYE Shooting Stars’ project, led by the Red Bull Skydive Team, took people to look at the sky for a few minutes to see those “shooting stars” who were nothing more than the experienced skydivers Marco Waltenspiel, Felix Seifert, Max Manow and Marco Fürst.

The first video of the initiative as part of the Christmas and New Year’s Party program of the Regional Secretariat for Tourism and Culture (SRTC), released on the social networks of Red Bull Portugal, VisitMadeira, SRTC, Red Bull Skydive Team and others, during the dawn of January 1st is about to reach the 500,000 views mark.

This morning, the regional secretary of Tourism and Culture, was with the team of athletes who performed this jump. At the meeting, Eduardo Jesus highlighted the experience provided, especially because he was shrouded in surprise, which increased its impact, and made a point of thanking and praising all the work of Red Bull that allowed the “Madeira Shooting Stars” to have been a success and that is putting the Region ‘in the mouths of the world’. “The professionalism they show in this action is unquestionable. What was done marks a very strong position”, he stressed.

Eduardo Jesus also took the opportunity to thank the athletes and the entire team involved in the project for the experience provided on the night of December 31st. “They managed to do something very special,” he said, adding that this could have been the beginning of a fruitful relationship between Madeira and Red Bull so that together they can find new projects and new solutions.”

At this morning’s meeting, Miguel Bastos, from Red Bull Portugal, explained that the company is looking for special places to carry out this type of project and “without Madeira this would not be possible”. Mário Pardo, well-known skydiver and Portuguese base jumper, who also accompanied the Red Bull team, made a point of mentioning the positive reactions of the audience who were watching and also thanked the SRTC for supporting the project.

In the conversation with the Red Bull athletes, the functioning of the suit used in this type of jump was explained, as well as the jump itself. In this specific case, the four skydivers jumped from a Portuguese Air Force plane at an altitude of 8,000 feet. Athletes highlighted the experience provided, having also highlighted the “huge” fireworks show that followed.

During these days, the athletes remain in the Region, exploring the island and finding and trying out ‘base jumping’ spots, as Madeira’s potential in this area is varied, as they made a point of mentioning. “We are really enjoying Madeira”, said the skydivers.